Our next stop was an exciting one as we had the first of our visitors- Grandad Geary was coming to stay.

We were passing Venice Airport en route so even picked him up on the way. We were worried about getting in to Arrivals towing the caravan, but as we wound our way around the circuitous one way system there Grandad appeared running alongside the car, not bad for a man with a bionic knee. We pulled over in a spot we really weren’t supposed to stop so he could jump in just before security shoo-ed us along.

Unfortunately he was treated to a noisy welcome from Stan, who then screamed for half an hour til we found an aire to calm him down.

As usual we’d requested a shady pitch, and as usual they’d ignored us. When I checked in they mentioned the lakeside pitch which I’d booked. I thought this was a bit odd as it’s not something I’d choose with a feral toddler, but had booked through pitchup with it being peak season so that may have been what was available.

We wandered down to look at our pitch to discover it had zero shade, although it was a huge pitch and had a beautiful view of the lake. We explored the campsite hoping to find a shadier pitch, but the only ones available were too small and we definitely needed the awning for our guest of honour.

We decided just to go for the lake side pitch, as the receptionist had explained that a good breeze comes off the lake, so hopefully we wouldn’t bake. We were almost done checking in when I noticed they had another surname on the form. When I pointed this out, it turned out they’d pulled out the wrong reservation- so the lakeside pitch wasn’t ours anyway. We went to check out the “new” pitch they’d given us, but having already scoped out the campsite, knew that it wouldn’t suit us. By this time Stan was also screaming in poor Grandad’s arms again.

We asked if we could take the lakeside pitch anyway, for which we paid a 5e per night supplement, but we have no idea where the poor people who had actually booked that pitch ended up.

After relieving Grandad and getting Stan napping, we enlisted some help from the neighbours to push the caravan on to the pitch nose first. This meant the front windows would open out on to the lake and we’d make the most of the breeze, and we’d have awesome views in the morning.

After a long day of driving, the last thing Simon wanted to do was get back in the car, but it also turned out we needed a new electric hook up cable. Quite a few of the sites we’d stayed at had electric boxes more than a couple of pitches away, but those that did always had extensions you could borrow as they were aware of the problem. This site didn’t, and without one, we’d have no power. Bugger. So a quick Google sent Simon back off in the car to a caravan shop while Dad and I set up camp and got the pizzas in. We had a pretty awesome view for dinner though, so it was almost worth it. 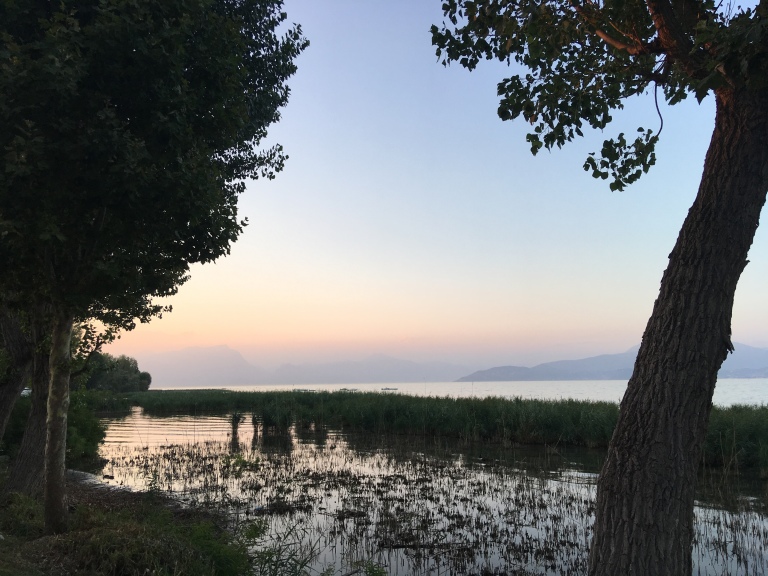 On Sunday we took a trip out to Sirmione, an old town on a spit of land jutting out into the lake. Never being the fastest at mobilising in the morning, we finally made it to the mainland part just as they closed the road on to spit because all the car parks were full. We easily got a space nearby, but this meant we had to walk the mile along the spit before we even started our explorations, and it was HOT!

We wandered around the coast, checking out the beautiful views and tiny coves, before we stumbled on a shady playground, perfect for Evelyn to burn off some steam. Carrying on through town we headed out to the headland of the spit for more beautiful views out onto the lake. We really struggled in the heat though, and this was the point we questioned whether heading further down into Italy in the peak of summer was a good idea. 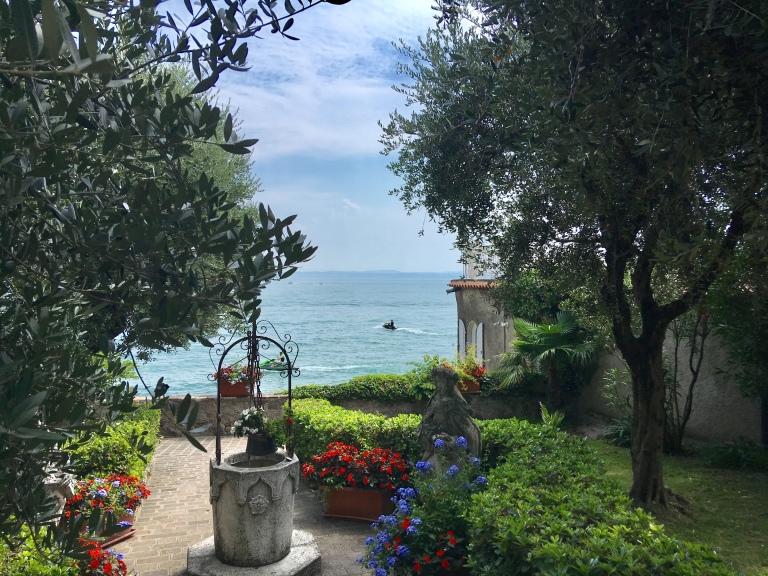 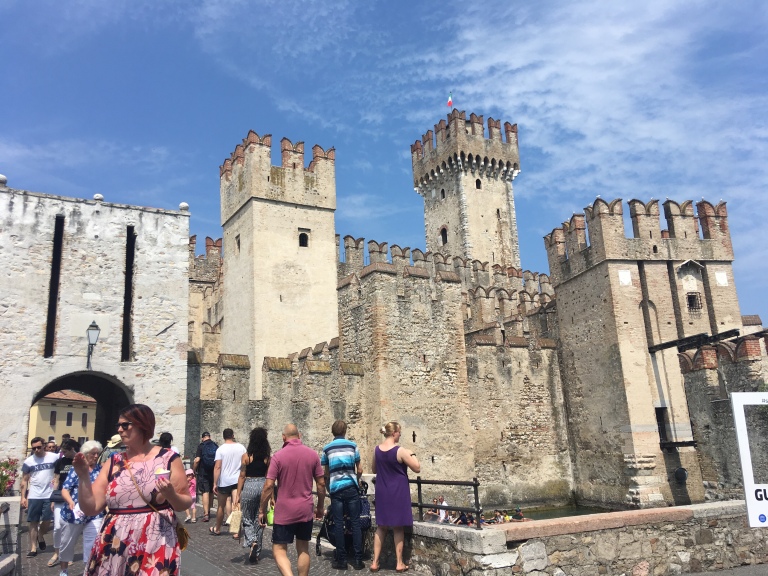 After a much needed ice cream, we started the long slog back to the car, only to discover we’d yet again lost Mr Moon. While Dad and I slogged back through the crowds, Simon went on the hunt and thankfully we were yet again reunited. From now on he’s not leaving the safety of the car! After our sweaty day out, we appreciated the relief of the pool in the afternoon.

We’d heard that boat trips were a good way to see the lake so were keen to do one (we’ll, I wouldn’t say I was keen exactly). After tracking down the ferry timetable and trying to get my head around the convoluted route/ timetable info, it appeared we’d based ourselves at the wrong end of the lake. Most of the nice villages to hop to were all on the north of the lake, and we were at the very south. Add in the fact that the ferries didn’t run especially frequently and it added up to a long day on boats, with little time at each village, and the stress of knowing if we missed one we’d end up stranded at the wrong end. So we canned that idea and aimed for the nearest of the recommended towns, with the idea that maybe we’d get a boat to the next village and back just to say we’d been on a boat.

We headed out to Salò on a very overcast day. The town itself was lovely, and we wandered along the lake front for quite a distance, but always under the threat of rain clouds. When the rain finally started we headed for cover in a lovely roadside cafe with an awesome charcuterie selection – where I promptly ordered a vegetarian lasagne, obviously. I worried it would be too heavy for lunch, but it was made with thin crepes rather than pasta, and sautéed grated veg, and it was delicious. With the weather still threatening, we abandoned the idea of a boat ride and instead went on the hunt for a home store to buy another fan for the caravan. Don’t say we don’t know how to show our guests a good time! The extra fan has been a lifesaver in the evenings though with kids in beds at opposite ends of the caravan.

The next day was Grandad Geary’s last day, but luckily his flight wasn’t til the evening. It was however from Venice. The nearest mainline train station was in Verona so we made the most of a day out in the home of Romeo and Juliet.

Verona is beautiful. A mass of narrow winding streets, with lots of interesting architecture. It has a huge old roman amphitheatre which is still used for music and theatre events – we’ve promised ourselves we’ll go back and see an event there. We checked out (supposedly) Juliet’s house and THAT balcony, and Romeo’s too for good measure, explored the lanes and the piazzas, wandered along the riverside and stopped for a lovely pasta lunch. And of course more ice cream. 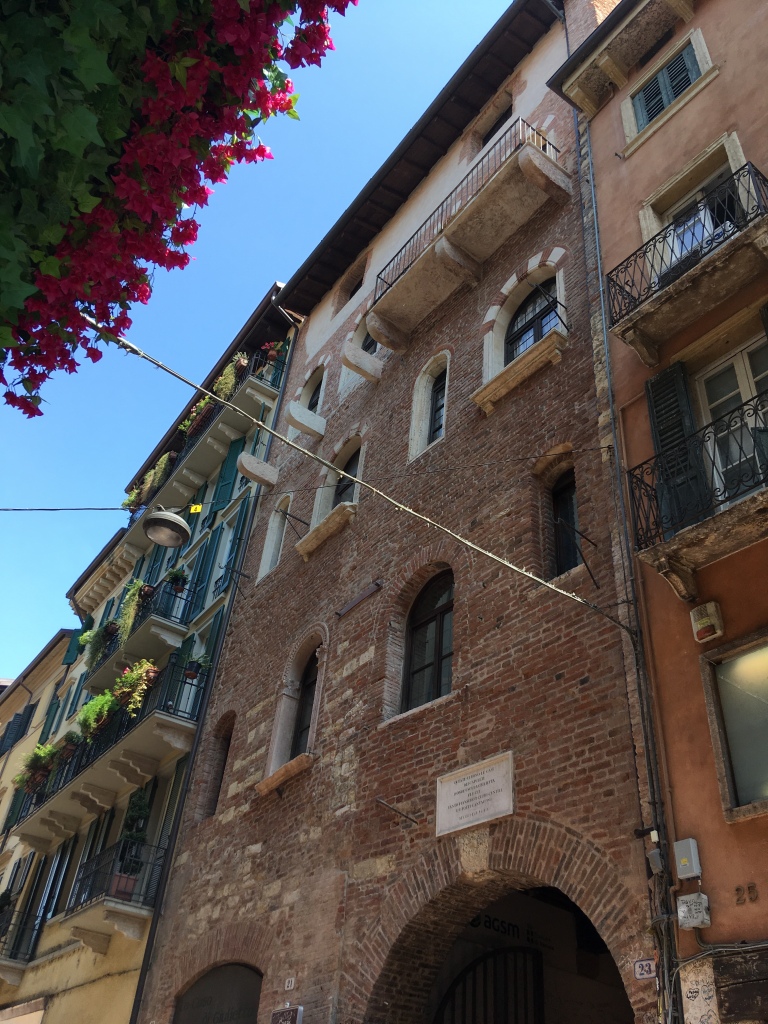 Then dropped Grandad off at the train station for his long journey home, while we headed back to the campsite to mull over thoughts of changing our itinerary to escape the heat.

Our last day on Lake Garda was spent doing our usual pack up, seeking respite from the baking heat, the pool, and exploring the overwhelming options available to us if we rerouted. Our stops, sights and campsites had been carefully researched and plotted over months. If we were going to change our route, we needed to do it after our next stop, which didn’t give us much time to work out where we wanted to go and where we might be able to stay with little notice in peak season.

We were definitely committed to our next stop though as we’d arranged to meet up with Simon’s parents in Bologna.