After an overnight ferry from Nice, the excitement of reaching the island of Sardinia was quickly tempered by the prospect of having to reverse the caravan off the ferry. With a not so patient audience of most of the car passengers waiting to disembark after us, I somehow managed to get first the caravan then the car onto land with the help of some French shouting and pointing from the crew members, although we did end up on the opposite side of the three lane car deck from where we started.

We then had a 45 minute drive to our campsite. Laura was pleased to be back on firm ground as she was suffering from motion sickness brought about by ten hours on the ferry. We were expecting this to be passing thing but the winding roads of Sardinia, where straight stretches appear to be few and far between, had other ideas and she struggled with it for most of the week.

On the plus side, arriving at a campsite in the morning as opposed to the usual early evening was a pleasant change, meaning we could take a bit more time in choosing our pitch, getting set up and putting that damn awning up yet again. The extra time was needed as we wrestled with the awning in the strong winds that were blowing across Sardinia – the same winds that had fuelled serious forest fires in the south of France and neighbouring Corsica the previous week but which were now thankfully dying out.

As our first evening set on what we thought was a quiet sleepy site we were surprised to have our dinner interrupted by very loud rock music blaring out from the pool area. As we started to wonder if we had got the vibe of the site wrong and fearful that staff had free reign on the restaurant stereo, Laura went to investigate. Fortunately it turned out to merely be father and son BMX tricks display around the poolside. While this lasted for two hours, it seemed to be accompanied by only three songs by The Offspring on repeat.

It turns out that Sardinia is a surprisingly big island (the size of Wales!) and we were miles away from the main sights we had wanted to visit. The long distances, lack of straight roads, and Laura’s motion sickness meant we quickly abandoned those plans. Instead, we picked a couple of nearby highlights out of the guidebook and headed off one day. As usual, this led to us climbing a big hill during the hottest part of the day – this time up to Castelsardo, a small old town perched high above the waves on the northwest coast of the island, with stunning views down the spectacular coastline in both directions. At the very summit there was a small castle which included the added bonus of a basket weaving museum! Following a nice lunch overlooking one of the vistas, where I had yet another pizza, we meandered back down to while away the remainder of the afternoon in a beautiful sandy cove. 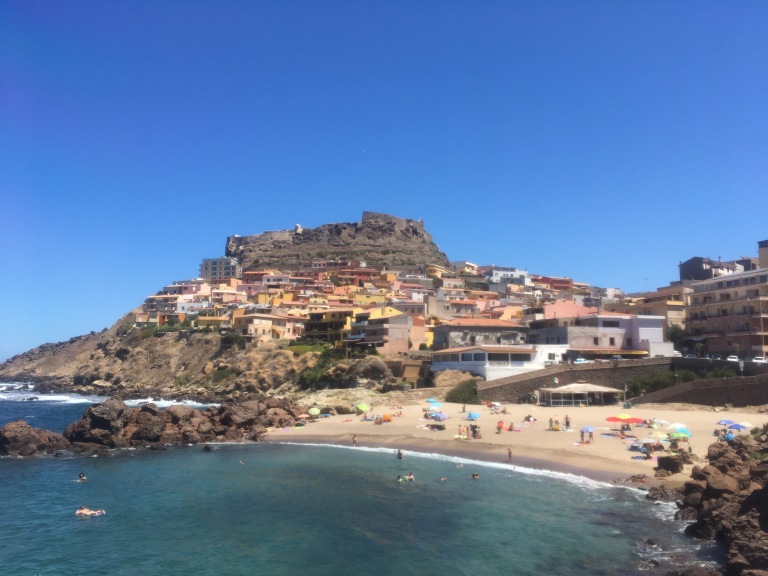 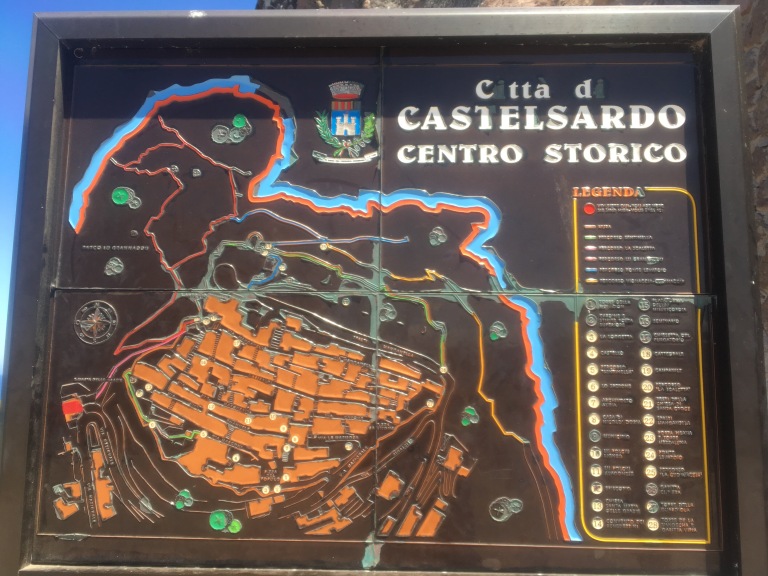 Another day trip took us to Santa Teresa Gallura, the main town in the north of the island, and doubled up as a reccy for where we need to get the ferry to Corsica a few days later. This was the closest thing to a tourist town that we found, with two beaches rammed with French and Italian holiday makers. We had a typical Italian pasta lunch in the grand town piazza before making our way a little down the coast to Capo Testa, a small outcrop of land with several popular beaches and coves. Having walked around the far reaches of the outcrop to the lighthouse, we again resigned ourselves to an afternoon on a lovely beach with the calm, pleasant Mediterranean water to refresh us from the sun. 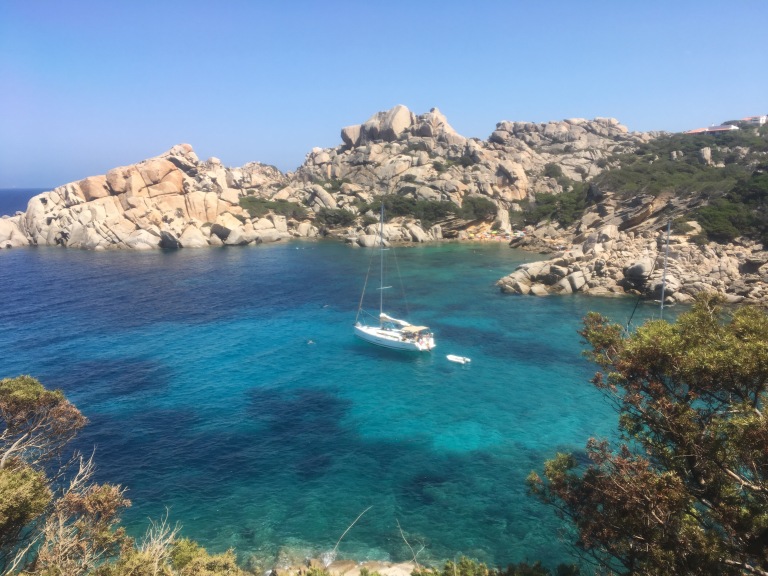 There was no doubt plenty more to see and do in Sardinia had we had the inclination, and our short tour really did not do it justice, but with the searing heat reaching the high thirties every day (normally before 11am!), we often decided to take it easy and stay at our campsite with the safety of the shade of the trees and the beautiful swimming pool. It was here where Evelyn really took to the waters and enjoyed splashing about in her floating chair. I think she was as grateful as all of us to get in the water and out of the blistering heat in the middle of the day. Bizarrely the pool was officially closed for three hours from 12:30pm every day – not that anyone took the slightest bit of notice of the lifeguard putting up his insignificant little fence and wandering off for his long lunch. 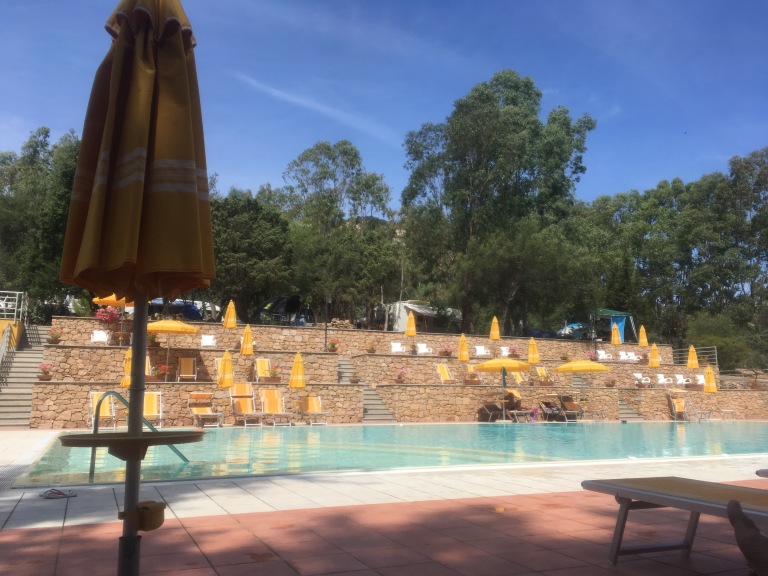 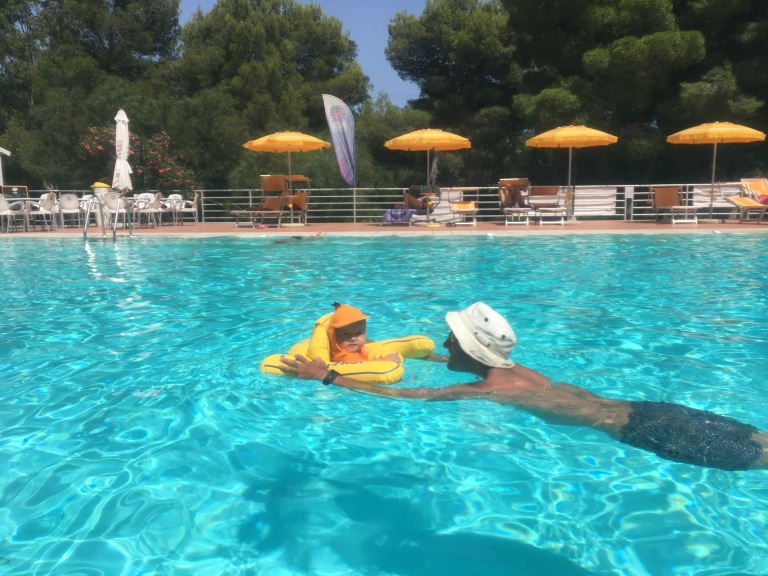